A new and charming fragrance which features the same basic components as those prescribed by Queen Marie-Antoinette to her perfumer, Jean-Louis Fargeon, when they met in the gardens of “Le Petit Trianon” some time in the second half of the 18th century, well before the French Revolution.

Promenade à Versailles Pour Elle is an intoxicating, seductive bouquet, which is as romantic as its bottle. Promenade à Versailles Pour Elle is at the same time young and romantic, as Marie Antoinette used to be. She possesses good taste and style, she looks smart, but youth is youth, and this young lady although a Queen, looks pretty whether she is wearing a royal gown or just a simple linen dress. 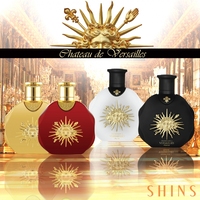